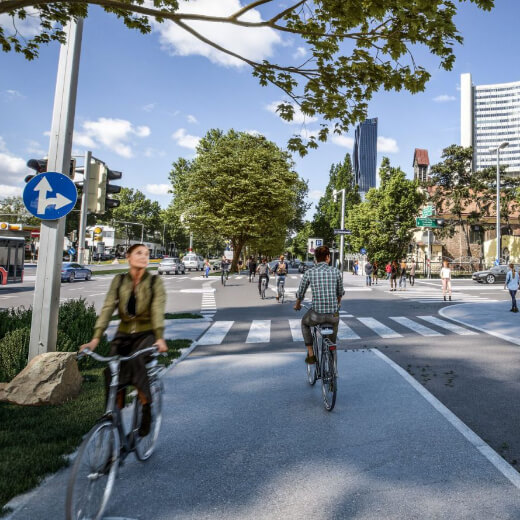 Our model cycling city to take away

This city is buzzing with cyclists, all travelling safely and comfortably. They have everything a cyclist could wish for, from a bicycle garage to protected intersections and a bicycle playground. We created this city for the international Velo-city Conference in Lisbon and although it is only two-dimensional, it shows the most important elements of modern cycle infrastructure. […]

Electric Cargobikes up to 60% faster

Deliveries and freight make up almost one third of inner-city traffic, which make climate friendly cargo bikes predestined for the so called “last mile”. A study by the environmental organisation ‘Possible’ and the Active Travel Academy of the University of Westminster showed that electric cargo bikes are considerably faster and more efficient in central London then conventional van deliveries. The [...]

The world’s most influential cycle-planning conference is set to take place this year once again, after cancellation in 2020 due to the Covid-19 virus. Cycle planning experts will meet under the slogan: “Cycle Diversity” between the 6th and 9th of September either personally in Lisbon, or via weblink. Our platform Cycle Competence Austria is also taking part with presentations and [...]

First Pan-European Masterplan for the promotion of cycling

On the 17th and 18th of May 2021, the fifth UNECE/WHO pan-European ministerial conference on transport, health and the environment took place. With over 850 registered participants, it was the largest such conference since the program was conceived. One result of which was the ‘Vienese Declaration’, the first multi-regional masterplan for cycling. Austria will become a pan-European competence center for [...]

During the first months of the Coronavirus pandemic, a worldwide trend emerged: the bicycle is a resilient mode of transport the use of which grew dramatically. Many municipalities saw this and responded by implementing pop-up bike lanes. Scientists at the climate research institute MCC asked, if this kind of investment in bicycle infrastructure would lead to the desired behavioral effects. [...]

In the Netherlands, subscription bikes have proved to be a successful alternative to buying a bike. Now this concept has arrived in Austria: rental bikes including repair service and insurance for a fixed monthly fee. The Financial Times recently listed the Dutch bike subscription service startup ‘Swapfiets’ in the top ten most rapidly growing businesses, such is the booming international [...]

The Institute of Advanced Studies was tasked by Radkompetenz member Klimaaktiv to perform a representative survey assessing the potential to increase cycling uptake in the Austrian population based on behavioral ecomonomics and subsequently, to compare these results to the participation group of the initiative ‘Österreich radelt’ (Austria cycles). Below, we will summarize the most important findings. The future cyclist is [...]

The regional government of Lower Austria has set itself ambitious goals for increasing cycling and the necessary cycling infrastructure. Our Radkompetenz member Radland created ‚Radland GmbH – Agency for Active Mobility‘ in order to be a central point of reference for questions and awareness, led by Susanna Hauptmann, Lower Austria’s new commissioner for cycling. An important part of the measures [...]

Bike Citizens, one of the Radkompetenz founding members, has recently modernized their free App, offering it to the worldwide public for the first time. The commitment of the company, based in Graz, alongside the City of Hannover, was awarded the first place in the ‘Service’ category at the German Cycling Award 2021. The region has been working on digitalization since [...]